and the Basilicas mosaic pediment

It was a timeless city that seemed to float between sky and sea. An enchanting city which gave a sense of oblivion and dream. Especially in the evening when the fading light draped it with gold... Everything became so unreal, the facades of the palaces, the canals, and narrow streets where Gabrielle Chanel loved to wander and lose herself, sometimes until after dark. Venice offered her the chance to heal and restore herself, and finally gave her back the will to live.

Boy Capel, her great love, had died in an accident two days before Christmas in 1919. Their love affair had lasted ten years. By advancing the funds necessary for the opening of her first boutique, Boy had enabled her to gain this independence, which was her highest ambition. He alone had treated her as an equal. He had taught her the true way to love unconditionally without influence and without control. And then Venice! The magical city changed everything! There she began to breathe again and slowly came back to her senses.

Misia and José-Maria Sert had spent weeks convincing her to follow them on their annual pilgrimage to the city of Venice.

The first few days, she was suspicious of this eternal reference to the past, of the decrepitude one imagined behind the facades of Grand Canal palaces.

Taking refuge in the imposing silence of churches, including that of La Salute, she gradually found comfort. And little by little, she let herself go. Gabrielle Chanel followed José-Maria Sert to museums, palaces and through the narrow streets. He knew everything, she would tell later. The routes of Antonello da Messina, the lives of saints, what Dürer had engraved at fourteen (...) what varnish Annibale Carracci used... She was imersed in a world of beauty.

Sert offered her the splendour of this city and its relics of the Byzantine Empire. He lead her behind the altar of San Marco to discover the Pala dOro, a work of metal craftsmanship more than 3-meters long, entirely set with polished stone cabochons. The bedazzlement she experienced before this unique treasure in the world would leave its mark forever. With the Venice of the past within her grasp, she went on to discover the hectic life of Venice in the 1920s. A city that was coming alive again after the war. The Venetians and the first tourists indulged with delight in the seaside and in relaxing on the beaches of the Lido. Then came tea on the terraces of the chic hotels that lined the shore and the eternal evenings with cocktails and nightcaps under the arcades of the Cafe Florian.

And this strange scene in Venice which had stuck in her mind and one she would recount much later to Paul Morand: One day at the Lido, I saw an elderly and respectable American woman seated under an umbrella, all the young Americans who were preparing to swim entrusted her with their jewelry. Finally, she looked like one of our Holy Virgins in Auvergne, studded with cabochons; the treasures of St. Marks paled in comparison.

Gabrielle Chanel made Venice her city. Born on August 19th, 1883, wasnt she placed under the sign of Leo like the city of Venice? This symbol is ubiquitous in the Serenissima, in the pediments and the doors of the palaces, mosaics and stone statues. The lion of St. Mark, this protective figure on a granite column overlooking the city and crowned with sunlight.

The lion embodies the glory and courage of Venice. Ambassadors and kings once bowed before he who surmounted the pediment at the entrance to the Doges Palace. The most famous artists, such as Carpaccio, had represented it in their paintings.

The lion gave strength to the city of which he was the emblem.

Venice built on the sea centuries ago, to resist the attacks of barbarian invaders, was indestructible, like Gabrielle Chanel who took charge of her own life, long before women became independent. For Gabrielle Chanel, the lion would become a recurring and familiar symbol. It ranks high among the objects that adorn her apartment on rue Cambon. In gilt bronze or marble, placed on a table, carved in wood on the edge of a chimney, it is there, the conqueror with its paw on top of the world. Mademoiselle Chanel used it as an emblem in her creations to decorate the buttons adorning her suits or on the clasps of her handbags. Chanel always saw this encounter with the Venetian lion as more than just a coincidence. For her it had to be a sign of destiny and a way to pick up the threads of her life with this new strength she had found in Venice. Symbol of the Evangelist Saint Mark, the patron saint of the city, the lion also embodies resurrection, if one believes the legend that claims its breath gave life to the three lion cubs. A long and meticulous restoration work

The restoration of the Lion of St. Mark and the gold studded blue mosaic is part of the extensive program of the Comité Français pour la Sauvegarde de Venise: firstly, thanks to private patronage it has restored over the past 16 years the Royal Palace, Piazza San Marco and has doubled the size of the Correr Museum; more recently, the French Committee has funded the restoration of two emblematic sculptures of the Serenissima in the Basilica of St. Mark: the Golden Lion, thanks to CHANEL, and the Quadriga Horses of Saint Mark with the support of the Groupe des jeunes of the Comité Français pour la Sauvegarde de Venise. 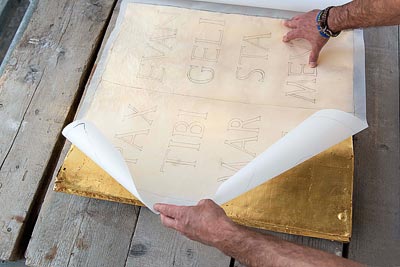 For centuries, the Lion of St. Mark has reigned on the facade of the Basilica of St. Mark, just above the Byzantine horses. Its gold had faded, but its allure nevertheless remained triumphant. It is visible from all sides of the square. Just above it, one can make out the tops of the church roofs and the sky. Its wings further enhance this magical impression. Amazingly, the lion is positioned in front of a star-studded mosaic; a sign of destiny as the Comet was also present in the creative world of Gabrielle Chanel. At any moment the Golden Lion of Venice, one of the CHANEL symbols, appears ready to spring into a starry sky. Two teams worked for several months to restore the lion and the mosaic: Gabrielle Chanel made Venice her city, and like it she was placed under the sign of Leo. The House of CHANEL decided to bring a new strength to this symbol of the city of Venice. The lion of St. Mark can once again reign over the Serenissima thanks to the work of the two teams and the patronage of CHANEL that allowed a complete restoration of this Venetian masterpiece. This project forever binds the House of CHANEL and the city of Venice.