The opal is a very poetic stone, an invitation to enter a fairy tale, to experience magic 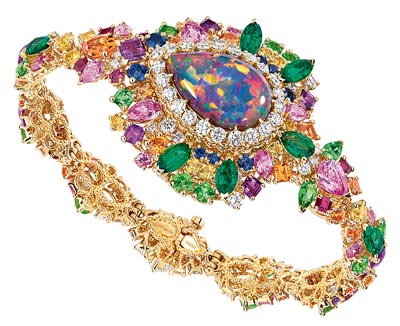 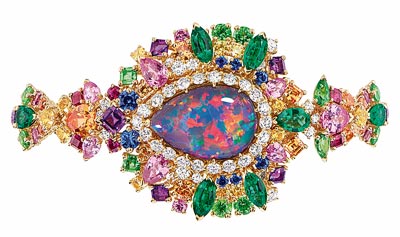 Its a mysterious stone, imbued with sometimes-contradictory beliefs. A single one seems to contain an entire world and reflect the origin of the universe. The infinite details of its narrative are like a perpetual invitation to reverie. If there were only one stone left in the world, it would have to be this one, because it carries within it the colors of all the other gemstones. The opal is a very poetic stone, notes Victoire de Castellane, Artistic Director of Dior Joaillerie. Its like an invitation to enter a fairy tale, to experience magic. When I look at an opal, I feel like Im seeing the earth from afar, the oceans, the archipelagos, and the reflections of stars on ocean waves... I see it as natures gemstone par excellence, a stone thats so intertwined with femininity, its connection becomes organic. 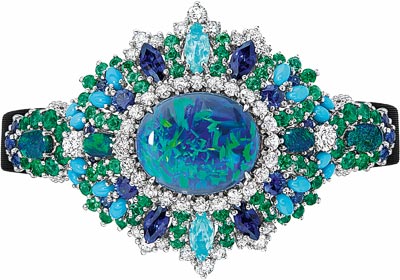 Dior Exquise Opal High Jewellery Timepiece
750/1000 white gold, 950/1000 platinum, diamonds,
black opals, emeralds, turquoises, sapphires and Paraiba-type tourmalines
Quartz movement - Ref.: JOLY93022
As one of Victoire de Castellanes favorite gemstones, the opal has been present in Dior jewelry collections from the very beginning. Now, it is the central gemstone in a high jewelry collection that required incredible feats by the best Parisian artisans, as much in terms of workmanship as in the search for stones. Each piece is designed like a showcase for its opals special beauty. On these precious timekeepers and special messengers of time, the opals color nuances echo the stones in the dial, bezel and bracelet: diamonds, emeralds, rubies, amethysts; pink, yellow and violet sapphires, spessartite garnets, tsavolites, demantoids and Paraiba tourmalines dialogue with the opals fire and seem to be reflected here in reds and pinks, or there in harmonies of blues and greens. 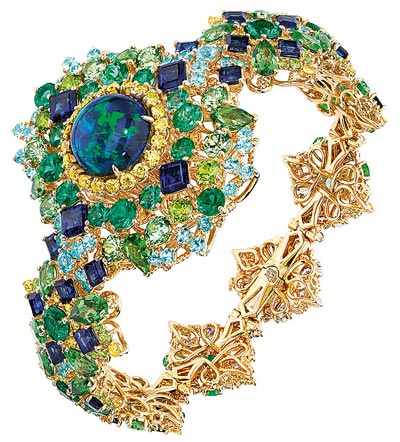 Dior Captivante Opal High Jewellery Timepiece
750/1000 yellow and white gold, diamonds, tsavorite garnets, sapphires,
emeralds, black opal, demantoïd garnets, Paraiba-type tourmalines and yellow diamonds
Quartz movement - Ref.: JOLY93028
On secret watches, opals pivot to reveal a dial set with diamonds. Above all, these are bracelets: It just so happens that the bracelets tell time, the designer comments. There are eight bracelets, a nod to Christian Diors favorite number. Five styles of La D de Dior with an opal dial and a diamond-set bezel round out the collections timekeeping offer. 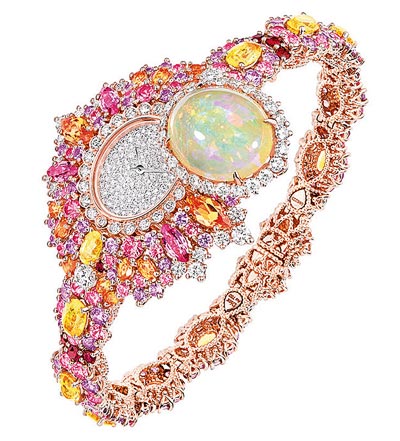 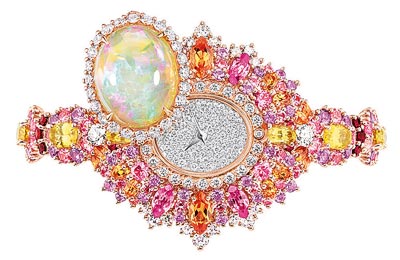 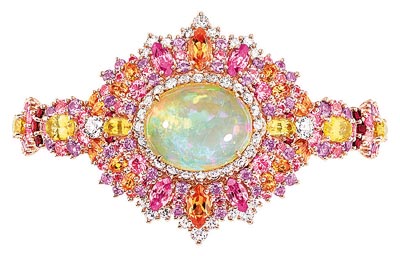 Dior Exquise Opal High Jewellery Timepiece
750/1000 pink and white gold, diamonds, pink sapphires, yellow sapphires,
light opal, spessartite garnets, purple sapphires and rubies
Quartz movement - Ref.: JOLY93023
Other jewels in the great opal adventure have their own story to tell. On rings, bracelets, necklaces and earrings, a central opal releases its fire, reflecting in multiple diamond cuts and settings. Here, one finds the spirit of the Cher Dior collection, says Victoire de Castellane. This time, its all in diamonds because I find it a fabulous gemstone for offsetting a pale color value: it reinforces a frozen aspect, as if the colors have been crystallized in a drop of water. 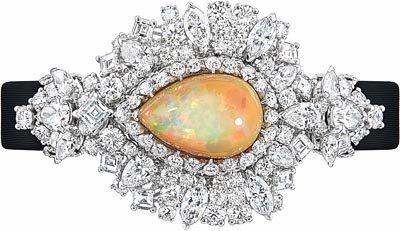 Nine pieces perpetuate the dialogue with Cher Dior, which, since 2013, has been designed like an ongoing epistolary relationship with Monsieur Dior: I like my collections to speak to one another, Victoire de Castellane explains. Im constantly pulling the thread and reworking things until I feel that theyve had the last word. 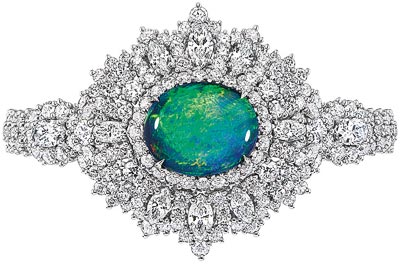 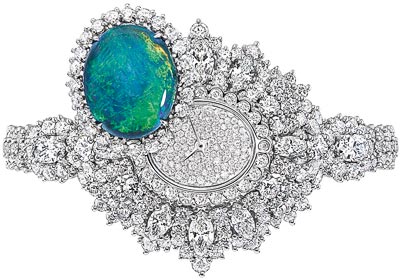 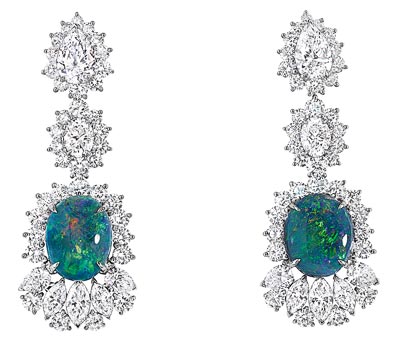 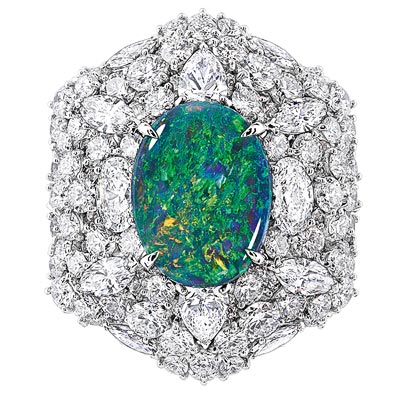 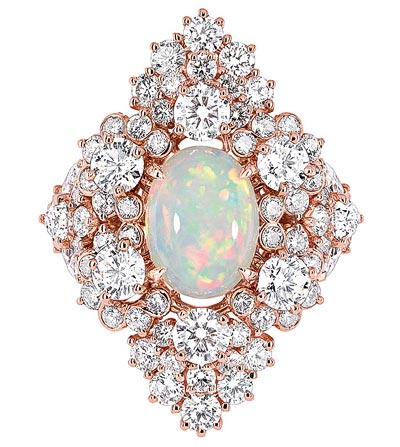 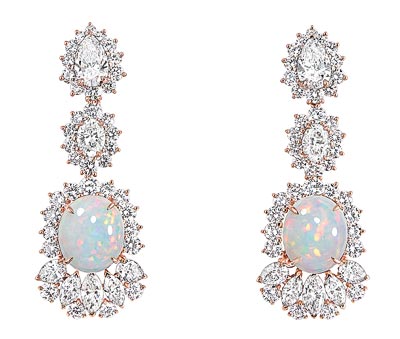 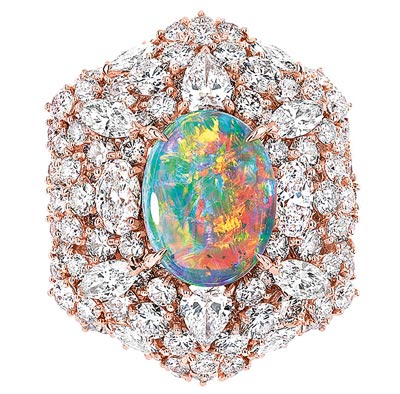 Dior Fascinante Opal Ring - 750/1000 pink gold, diamonds and light opal - Ref.: JDDE93057
Lastly, Dior et dOpales is a story of jewels that, under the heading Petit Panache, explore one of the designers favorite themes, the feather: six rings and four pairs of earrings feature opals that are by turns radiant or outlandish, reigning in majesty amidst feathers in yellow, white or rose gold set with white diamonds. Its as if the stone simply alighted on a precious, light duvet: one can easily imagine that these feathers might have penned a correspondence between Christian Dior and Victoire de Castellane. An exchange of messages about opals and Dior. 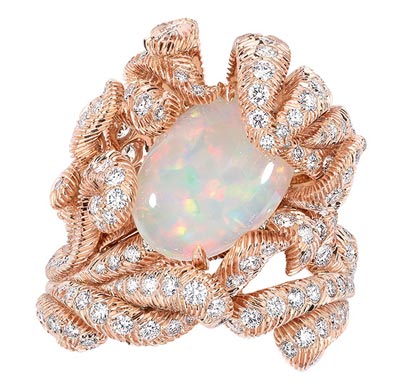