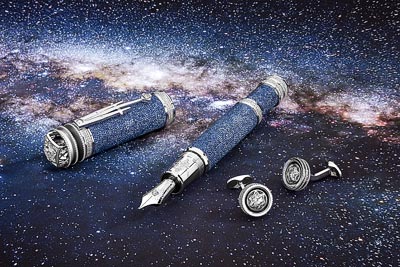 Since the dawn of time mankind has looked at the skies above in awe, yet only a handful of individuals have successfully unlocked the mysteries of the universe, pushing the boundaries of human knowledge. One of those brilliant minds was Johannes Kepler (1571- 1630), a formidable mathematician, astronomer and astrologer, who uncovered the laws of planetary motion, laying the foundations for the development of modern astronomy. Considered by some as the first astrophysicist in the history of science, this free spirit and scientific revolutionary moved beyond hypothetical observations to demonstrate the movement of the planets through mathematical and experimental research. 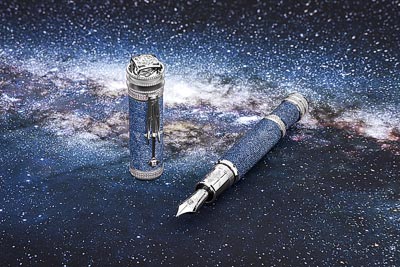 In honour of a pioneer who inspired generations of scientists after him from Newton to Einstein, Montblanc presents the High Artistry Homage to Johannes Kepler Limited Edition. Created by the Montblanc Maison Artisan Atelier, each of these masterpieces illustrates Keplers extraordinary dedication in his search for the infinity of the universe taking design cues from the many ground-breaking works he penned during his lifetime. 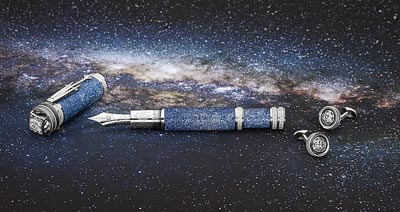 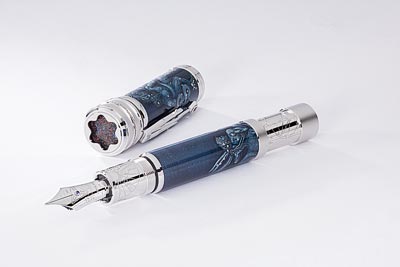 The Homage to Johannes Kepler High Pede Serpentari Limited Edition 39 draws inspiration from an illustration from his book De Stella Nova in Pede Serpentarii that indicated the location of the 1604 supernova on the foot of the Ophiucus constellation. The unusual silhouette of the Au750 solid white gold Limited Edition recalls the Kepler telescope developed to observe the heavens with higher magnification than the existing Galileo telescope. The white gold of the cap top, cone and fittings contrast with the deep blue of the lacquer of the cap and barrel, elegantly set with shimmering diamonds to evoke a star-filled night sky. Using Hand Engraving Overlacquering, a special technique used for the first time by Montblanc, intricate three-dimensional hand engravings beneath the lacquer depict the Ophiuchus and Sagittarius constellations that he studied in his De Stella Nova. 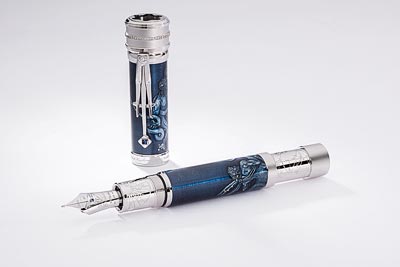 Montblanc fountain pen Johannes Kepler Pede Serpentari Limited Edition 39
The drafting compass used by Kepler inspired the distinctive design of the clip, which is adorned with a princess-cut sapphire. The inspiration for the engraving on the cone of the writing instrument is the elliptical movement of Mars that Kepler described in his Astronomia Nova, while a further engraving inspired by the astronomers model of the solar system featured the Mysterium Cosmographicum decorates the bottom of cone. The discovery described by Kepler in De Stella Nova of the conjunction of Saturn, Jupiter and the supernova is immortalised on the handcrafted rhodium-coated Au750 gold nib with a precious blue sapphire set on the nib. 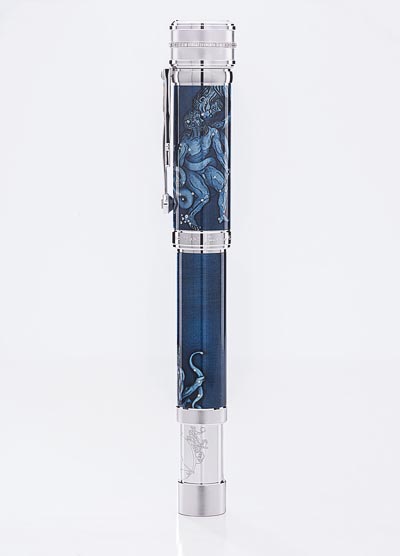 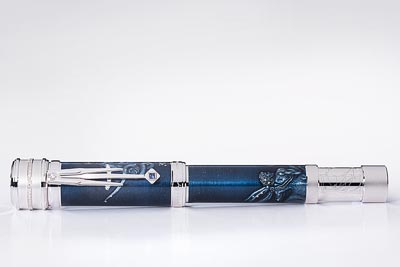 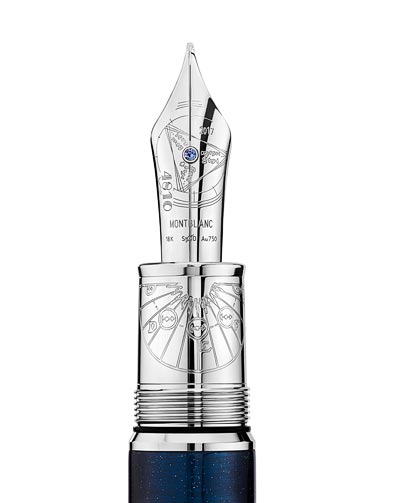 Montblanc fountain pen Johannes Kepler Pede Serpentari Limited Edition39
The inspiration for the engraving on the forepart is Keplers depiction of the gravitational pull of the sun on the other planets. The three rings of the cap top of this Limited Edition, one set with a delicate pavé diamonds, symbolize Keplers Three Laws of Planetary Motion. Crowning the writing instrument, a uniquely coloured opal in the cap top brings to mind the supernova first described in his treatise, the birth of which proved to Kepler the variability of the universe.

The limitation number of the Homage to Johannes Kepler High Artistry Astronomia Nova Limited Edition 9 marks the year 1609 when Kepler first published Astronomia nova, regarded as one of the greatest books on astronomy. The Ophiuchus and Sagittarius constellations from his book De Stella Nova have been masterfully recreated as a special dual-colour Au750 gold skeletonized overlay, contrasting with the deep blue lacquer underneath. The intricate constellation map is punctuated by sparkling white diamonds representing the bright stars in the sky and other coloured emstones shining as planets. Inspired by his model of orbits from his Mysterium Cosmographicum, a generous lapis lazuli shaped like a globe sits atop the cap encircled in a sculptural structure made of three rows of pavé diamonds. The forepart of the fountain pen is etched with a delicate drawing of gravity from Keplers Astronomia Nova. Evoking the winter solstice of 1600 while Kepler was in Prague with his another legendary astronomer Tycho Brahe, the cone features a representation of the sky they observed, set with dazzling diamonds as stars. Engraved on the nib, a drawing of Sun from the Epitome Astronomiae Copernicanae is enhanced with a single diamond. A final nod to the genius of Kepler, the bottom of the cone is decorated with a representation of his third planetary law that states that the squares of their orbital periods are proportional to the cubes of the long axes of their orbits. 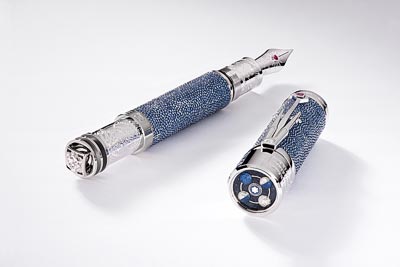 Paying tribute to the five Platonic solids that represent the universe in Keplers cosmological theory with a limitation of just five pieces, the Homage to Johannes Kepler High Artistry Somnium Limited Edition 5 is a masterpiece of precision stone-setting with hundreds of sapphires set together to capture the scintillating beauty of the Milky Way. Each stone has been carefully chosen by colour to create a flawless transition. The edition is also the very first writing instrument in the world equipped with an automatic watch movement inspired by Keplers drawings of the moon phases. 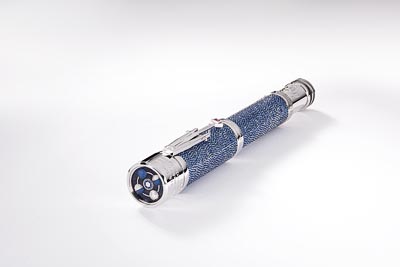 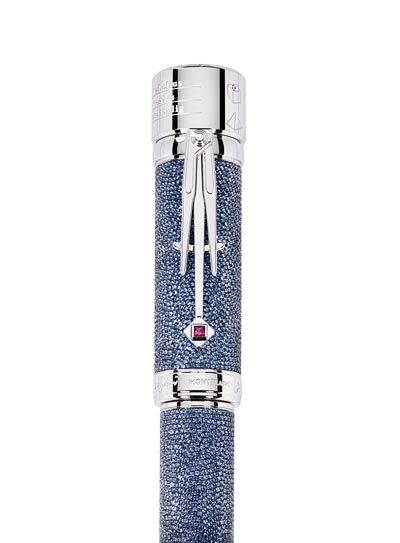 Montblanc fountain pen Johannes Kepler Somnium Limited Edition 5
Montblanc developed this special moon phase complication sitting at the summit of the writing instruments cap in the Maisons manufacture in Villeret in the Swiss Jura. The dual-rotation system allows the Montblanc emblem in precious blue lacquer at the centre to rotate to indicate the functionality of the movement, while the moon phase rotates to indicate the actual moon phase. The dial is made of aventurine, while the bright sides of the four moons pieces are created out of white gold coated in palladium and the darker side are created by flaming treatment. 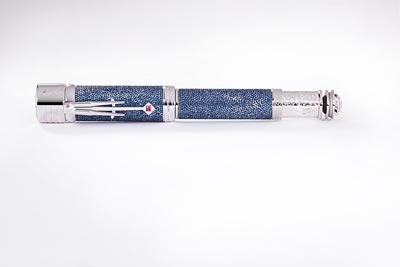 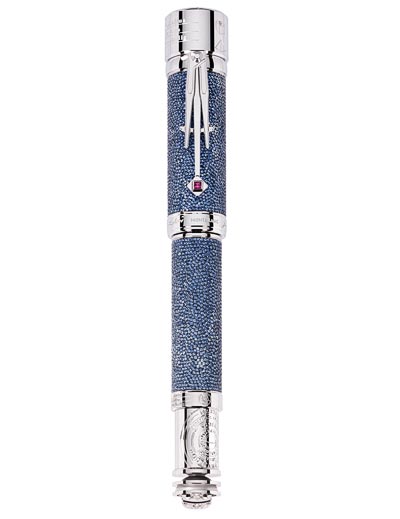 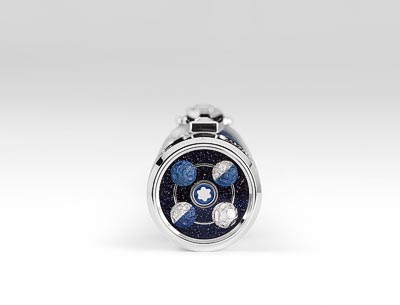 Montblanc fountain pen Johannes Kepler Somnium Limited Edition 5
In order to ensure the full functionality of the moon phase, the writing instrument comes with a special re-winder displayed in a precious handcrafted wooden box. Entirely developed and produced in-house, the re-winder is equipped with a 24V High Performance Synchronous Motor. The design details tell the story of Keplers scientific achievements and discoveries. The Au750 solid gold forepart of the writing instrument is decorated with his drawing of the Planetary conjunction chart from De Stella Nova, while the cap top and the cone are intricately etched with sketches of the five platonic solids and the orbits of planet from Mysterium Cosmographicum. Both the compass-shaped clip and the nib of the fountain pen have been set with precious red rubies.

Just like the exceptionality and rarity of the 1604 Supernova first recorded by Kepler, the most recent supernova in the galaxy to have been unquestionably observed by the naked eye, the Homage to Johannes Kepler High Artistry Stella Nova Limited Edition 1 is one-of-a-kind. With a price of 1.4 million, it masterfully combines the finest materials with the most expert techniques to push the limits of craftsmanship. Its full pavé set cap and barrel shimmers with a multitude of blue sapphires meticulously selected and set to emulate the fascinating night beauty of the Milky Way with its ethereal hues of blues. In total 570 diamonds and 5294 sapphires adorn the writing instrument. Like the brightest of stars, this edition is crowned by a spectacular of approximately 6,20 ct, DIF Montblanc diamond suspended inside an elaborate three-dimensional white gold structure, with three rings symbolizing Keplers Three Laws of Planetary Motion: the law of ellipses, the law of equal areas and the law of harmonies. Contrasting with the deep blue of the sapphires that coat the length of this masterpiece, the white gold fittings and cone are set with bright diamonds using different techniques from pavé setting to bead setting, demonstrating in one writing instrument the full breadth its gem-setting know-how. 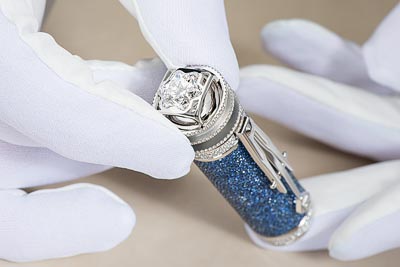 The intricacy of the stone setting mirrors the detailing created by its master-engravers with the forepart of the writing fountain pen decorated with the Ophiuchus constellation from De Stella Nova and the orbit of Mars from Astronomia Nova featured on the bottom of the cone. Adding a final touch of brilliance, a single diamond is set on both the precious AU750 nib and the compass, a reminder of Keplers lifelong passion for stars shining in the skies above him. 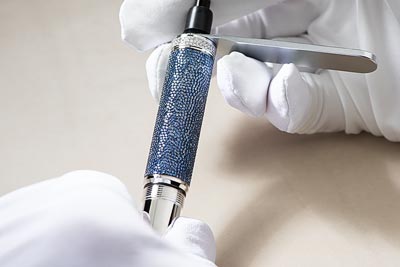 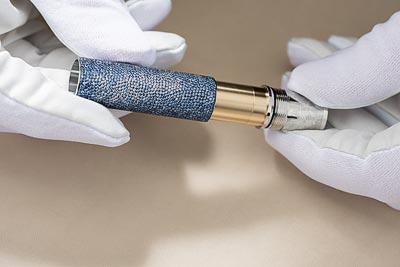 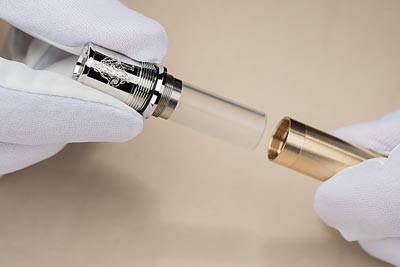 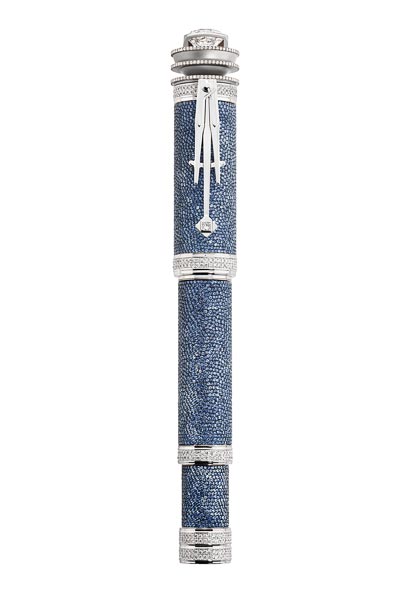 To better display the Johannes Kepler High Artistry Stella Nova Limited Edition 1 and the Homage to Johannes Kepler High Artistry Somnium Limited Edition 5, Montblanc has partnered with Porzellan Manufaktur Nymphenburg to create a pen stand entirely made by hand using original 18th century techniques. With great artistry, the off-white biscuit porcelain has been intricately shaped like the 17th century scrolled collar Kepler wore, on top of which is set an open porcelain scroll depicting a drawing of the astronomers planetary movement. 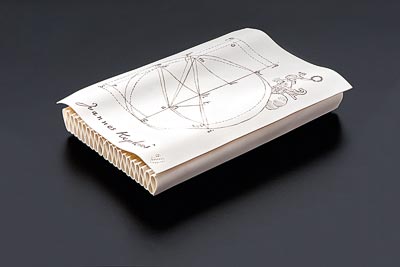 A pair of matching Stella Nova Limited Edition 1 cufflinks has been specially created in white gold to complement this exceptional writing instrument. Shaped like his platonic model of the solar system, the cufflinks feature Montblanc diamonds of 1,71 ct and 1,72 ct, both F/ VVS1, at their centre, while the structure of the model is set with a total of 262 round diamonds, giving these rare pieces added brilliance. Guided by the pioneering spirit since 1906, Montblanc revolutionized the culture of writing with breakthrough innovations. Today, the Maison continues to push boundaries and evolve the expression of fine craftsmanship across each of its product categories: the pinnacle of luxury writing instruments, timepieces, leather goods, accessories, fragrances and eyewear. With every innovation, Montblanc offers new functionalities and groundbreaking designs imbued with the Maisons heritage of sophistication and crafted to the highest standards through the skills of its artisans in each of its manufactures whether Hamburg, Germany for its writing instruments, the Swiss Jura in Le Locle and Villeret for its timepieces or Florence, Italy for its leather goods. Reflecting its ongoing mission to create fine lifetime companions born from the most pioneering ideas, the iconic Montblanc Emblem has become the ultimate seal of performance, innovation, quality and expression of style. With its origins deeply rooted in the culture of handwriting, Montblanc continues to assert its cultural commitment around the world with the creation of wide-ranging initiatives to promote arts and culture in many forms, while honouring the modern day patrons who support the advancement of the arts.