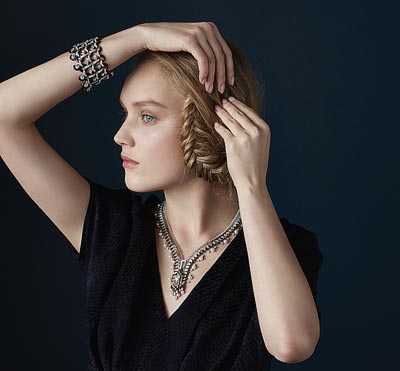 Devoted to art, antiques and design, the international Masterpiece London Fair brings together major works in the elegant surroundings of the Royal Hospital Chelsea each year. Bearing witness to the artistic movements of more than a century, the Maison is taking part for the second consecutive year. Alongside contemporary High Jewelry and Watchmaking creations, it will be presenting vintage pieces from the Heritage collection, some of them shown in public for the first time. While the stylistic references of the last century echo those of today, each item illustrates the excellence, inventiveness and savoir-faire that have characterized Van Cleef & Arpels since 1906.

For more than 10 years, the Maison has sought out creations that it produced from the 1920s to 1980s and made them available to buyers from all over the world. Since its inception, this Heritage collection has brought together several hundred pieces, some of them extremely rare, that illustrate the development of the Van Cleef & Arpels style. Before being unveiled to the public, each of them undergoes extensive archive research, enabling it to be accompanied by a certificate of authenticity. This year, Van Cleef & Arpels is notably presenting a necklace from 1949  a period when jewelry reestablished a timeless aesthetic  along with creations from the 1970s: a cheerful, carefree period in which a hippie influence and oriental inspirations combined. 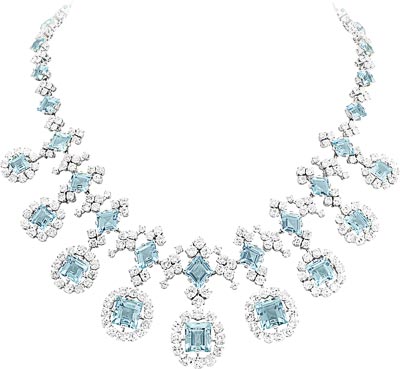 Aquamarines, with their sea-like hue and transparency, are given pride of place on this majestic jewelry set in white gold and platinum. The first strand of the necklace traces an ethereal lacework in which fine stones and lozenge-set diamonds alternate. Nine pendants then unfurl, each of them made up of a large square aquamarine surrounded by a sparkling crown. This arrangement is repeated identically for the matching earrings. 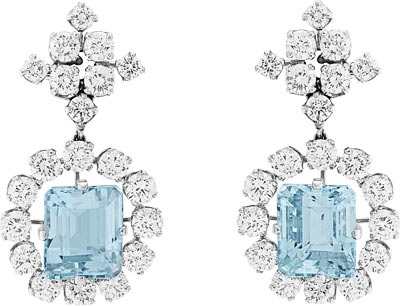 While the association of colored stones and diamonds is typical of the 1940s and 1950s, the choice of fine stones is more unusual and heralds the creative freedom of the decades to come. The necklace associates 37 aquamarines weighing over 50 carats with 290 round diamonds, in a gradation of particularly elegant proportions. 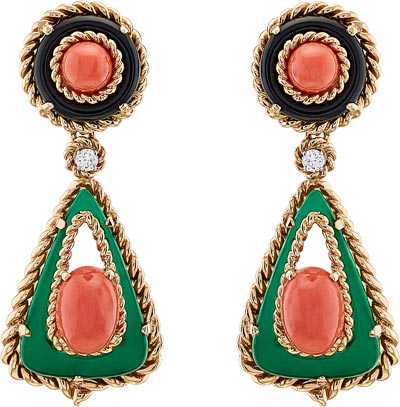 Necklace and earrings, 1972
Yellow gold, platinum, round diamonds, cabochon-cut coral, onyx, green chalcedony
Daring, exoticism and creativity were the watchwords of the 1970s, marked by the hippie movement and a wave of oriental inspiration. At Van Cleef & Arpels, they made themselves felt in fluid lines, associations of precious, hard and organic stones and a dazzling range of colors. Dating from 1972, this set is made up of a long necklace and matching earrings, highlighted by twisted strands of gold. The long necklace presents a highly contrasted alternation of onyx rings and oval motifs of green chalcedony, embellished with coral cabochons and diamonds. Recalling the style of Van Cleef & Arpels medallion necklaces of the same period, three triangular motifs provide the piece with a graphic finishing touch. With equal harmony, the earrings  fringed with thin twists of gold  continue this combination of forms and materials. 
From the outset, Van Cleef & Arpels distinguished itself in the art of High Jewelry, which remains a faithful expression of its identity. The contemporary creations on display at Masterpiece London  some of them for the first time  reflect the Maisons savoir-faire, along with its most emblematic sources of inspiration. In the hands of its virtuoso craftsmen, Butterfly clips become marvels of lightness and delicacy, while the intricacy of a Zip necklace takes on a subtly oriental style. 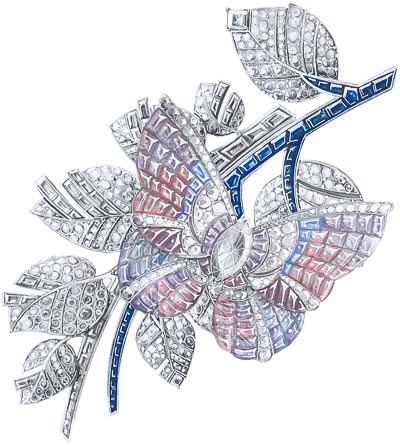 Papillon Mystérieux clip
White gold, round, baguette-cut and square-cut diamonds, baguette-cut blue and mauve sapphires,
Vitrail Mystery Set colored sapphires, one marquise-cut D IF type 2A diamond of 2.29 carats
Blending in with the shimmering foliage on which it has alighted, the Papillon Mystérieux clip can be transformed to suit any mood or occasion: the diamond branch can be removed to become a comb, while the rest of the piece offers a new version of the clip. Around glittering stems  one of which is entirely set with baguette-cut sapphires  leaves of round, square or baguette-cut diamonds create the illusion of a plant. Illustrating Van Cleef & Arpels jewelry-making expertise, the butterfly features a marquise-cut diamond body (D IF type 2A, weighing 2.29 carats) and wings in Vitrail Mystery Set. Unveiled by the Maison in 2014, this exclusive technique magnifies the relief and translucency of the stones in an interplay of shades and reflections. The setting remains invisible, as pink and mauve sapphires reveal their delicate rainbow hues. 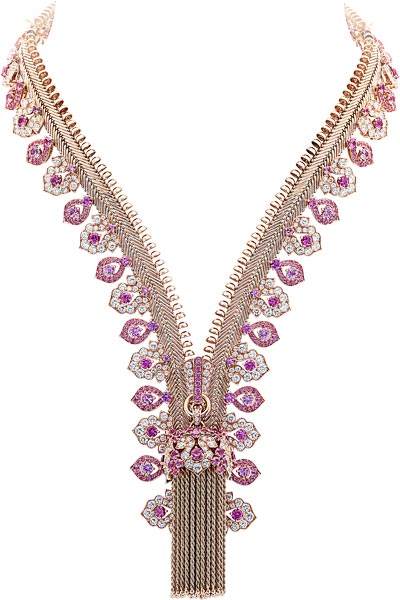 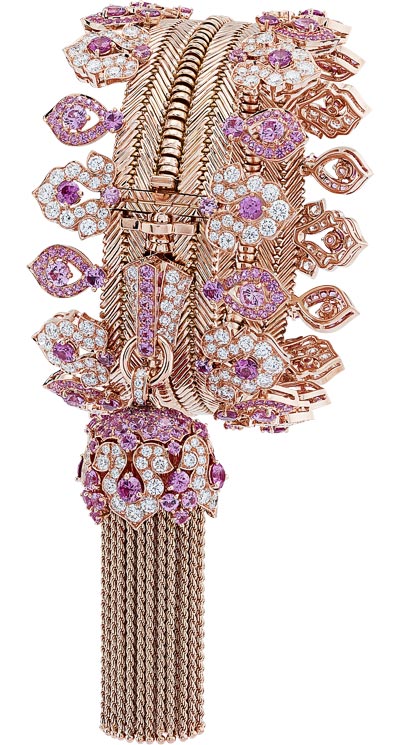 Zip Antique necklace, transformable into a bracelet
Pink gold, round diamonds, round pink sapphires
The story of the Zip necklace goes back to the late 1930s, when the Duchess of Windsor suggested that Van Cleef & Arpels create a jewel inspired by the zip fastener. Eventually produced in 1950, this masterpiece of ingenuity can be transformed into a bracelet. Since then, the Maison has regularly reinterpreted the emblematic Zip necklace, including this version that called for nearly 1,000 hours of work.

Its flexible central structure in the form of a chevron is bordered by a flowery garland of oriental inspiration, whose motifs sparkle with diamonds and three shades of pink sapphires. Forming a gentle harmony, the puller is finished off with a tassel of twisted strands punctuated by beads of pink gold. It accompanies the curve of the neckline when the necklace is worn open and gracefully molds itself to the movements of the wrist when worn closed as a bracelet.

Stemming from the encounter of two families, the story of Van Cleef & Arpels began in Paris in 1895, with the marriage of Estelle Arpels and Alfred Van Cleef. Alfred was the son of a lapidary and diamond broker from Flanders, while Estelles father had been a draper in Amsterdam before moving to Paris and becoming a dealer in precious stones. 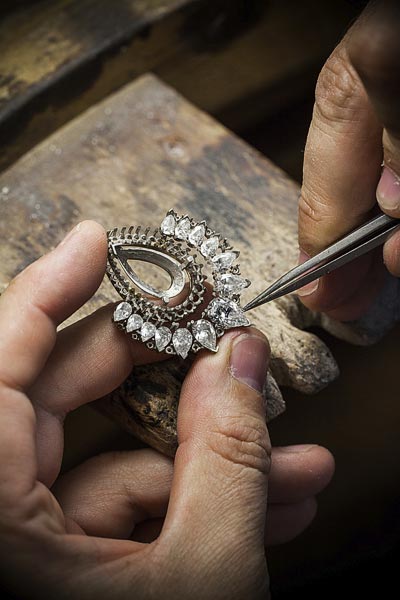 Jewelry work, adjusting the prong setting - © Van Cleef & Arpels
In 1906, the couple pooled their expertise to create a jewelry Maison: Van Cleef & Arpels. In partnership with Estelles brothers Charles and Julien  followed by Louis  they opened their first boutique at Paris 22 Place Vendôme, in an area renowned for its luxury and elegance. The address has become a symbol: the Maison remains there to this day. Its growing reputation among the international elite enabled it to open branches in the most fashionable holiday destinations and seaside resorts. Julien Arpels sons Claude and Jacques  followed after the war by their brother Pierre  also entered the profession. While Jacques and Pierre managed the Paris business, in 1939 Claude settled in New York, where Van Cleef & Arpels Fifth Avenue boutique was inaugurated in 1942.

During this first half of the century, Van Cleef & Arpels developed skills that would become its signatures: the ingenious vanity case christened the Minaudière, the Mystery Set technique in which metal disappears to accentuate the precious stones, the transformable Passe Partout jewel or the innovative Zip necklace, inspired by the zip fastener. Nature, dance and couture established themselves as major sources of inspiration, giving rise to pieces notable for their grace and movement. The elegance of its creations, along with its use of the rarest and most precious materials, enabled Van Cleef & Arpels to win over royal and princely families, Hollywood icons and a cosmopolitan clientele of discerning taste.

Over the decades, the excellence of the High Jewelry Maison established its reputation across the world. Its emblematic creations  such as the Alhambra® long necklace created in 1968 , its selection of Pierres de Caractère, exceptional gems that instill emotion, and the savoir-faire of its Mains dOr, the virtuoso craftsmen of Van Cleef & Arpels workshops, have given birth to jewelry and watchmaking collections redolent of dreams and enchantment. Today, the Maison remains faithful to this highly distinctive style characterized by poetry, creativity and artistic sensibility, offering the world a gateway to a timeless universe of beauty and harmony.